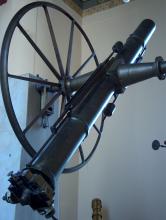 This is one of the first instruments of the Observatory of Athens. It belongs to part of the Georgios Sinas donation. It was exhibited, in 1845, at the Vienna exhibition of scientific instruments and in 1847, G. Vouris, the first director of the observatory, brought it to Athens among other instruments.
The Meridian telescope is used to determine the co-ordinates of celestial bodies. It rotates around a horizontal axis perpendicular to the meridian, so that it can only move along the meridian plane. The roof above the telescope opens in a manner so as to allow observation of celestial bodies situated on the meridian plane, from North to South. The refraction telescope includes 5 interior filaments for the precise micrometric observation of a star passing through its field. Used in tandem with a stellar chronometer, it allows the observer to record the precise time when a celestial body crosses the meridian, i.e. the middle of the 5 filaments viewed in its field. The wheel of the instrument served as a goniometer scale, so that the zenith angle as well as the polar distance of the body can be accurately measured.
Starke meridian telescope has been mainly used by the master time service i.e. to accurately determine the time, which was a daily task of the Observatory (observatory standard time). Furthermore, it has been used to determine the precise latitude and longitude of the Observatory, the reference for the mapping of Greece.
For the purpose of specifying the time, an observer would refer to astronomy tables, so as to establish the precise time when a particular star would cross the meridian of the Paris Observatory (Greenwich from 1884 and onwards). Then, the transit circle would be set to a suitable polar distance (this also derived from astronomy tables), so that the particular star would cross the field of view of the telescope. Then, the observer would wait for the star to enter the field of view and at the time it would precisely cross the back of the micrometer's middle filament, he would note the time indicated by the Kessels pendulum.
The difference in longitude between the Athens and Paris observatories, as specified by G. Vouris, was 1h 25mn 34,23s. Thus, if a star failed to cross Starke's meridian, according to Kessels pendulum, precisely 1h 25mn 34,23s before the expected crossing from the Paris Observatory meridian, the clock would be corrected and thus, precise time would be provided to Athens as well as to the ships approaching the port, so that they would calibrate their chronometers.