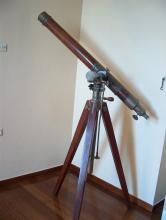 Equatorial refractor Jacob Merz
This was the private telescope of Professor H. Mitsopoulos. It was given to the Observatory in 1939 and was used for solar observations s until 1960.
Georg Merz (1793-1867 was Fraunhofer pupil and constructed some of the most famous 19th c. telescopes. After his death Merz factory was runned by his son Sigmund and after him his nephew Jacob.