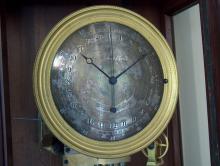 "Each day, the chronometer department attendant of the Astronomy Section, would determine the absolute state and daily course of the Berthoud, Kessels and Ηipp pendulums, of the Observatory chronometers as well as private chronometers and clocks subject for study, using the Fénon pendulum as reference. The attendant must change the oil in the pendulums and the clocks of the observatory, at maximum 2 year intervals. The attendant maintains the Berthoud pendulum in top condition, which is used to transmit time to the city, and must be less than +δ 0,2 by adding or removing weights. The external electric clock of the Observatory must be inspected and care is required so that it displays precise time. The attendant adjusts pendulums each Saturday and chronometers every day respectively, always at the same time. Precise time is transmitted by phone to the Observatory stations and by telegram to other Government institutions. The attendant supervises regular, daily transmission of hour to the city and compares -in person or through a representative- the accuracy of the time, once or twice a week if necessary, in conjunction with the Head of the watch makers of the town."